The Käte Hamburger Centre for Apocalyptic and Post-Apocalyptic Studies (CAPAS) is a centre for advanced research at Heidelberg University; funded by the Federal Ministry of Education and Research. It aims to research how catastrophes and end-time scenarios affect societies, individuals, and environments. The exchange with the public and the arts are a central part of the centre’s research interest. Art has a two-fold relevance since it both expresses and shapes a particular cultural imaginary about the ends of worlds. CAPAS fellow Prof. Dr Adolfo Mantilla Osornio curated the cooperation and exhibition with Mexican artist SANER, who created the artist's collection Post-Apocalyptic Visions of the 12th Book which accompanies the creation of a mural at the Julius-Springer-Schule in Heidelberg.

The first version of the story of the destruction of the pre-Hispanic Mexica world, contained in book XII of the Historia general de las Cosas de la Nueva España, was written in Nahuatl (a native language) and Spanish by Fray Bernardino de Sahagún, presumably between 1545 and 1551. The story is based on earlier images, that previously have been passed on together with oral indigenous narratives. Thus, they are not mere illustrations as they only subsequently were transcribed into written text in Nahuatl and Spanish. The later versions of the text in the so-called Florentine Codex and Codex Matritenses were derived from that early manuscript. Book XII begins by referring to eight tetzahuitl, a word that in the narratives of the Nahuatl tradition refers to manifold events that foreshadow phenomena that are said to bring about the alteration of the order of individual and collective life. In many cases, these stories related to the end of societies, existences, and civilization collapse, as seen in the texts contained in the Relación de Michoacán, are attributed to Fray Jerónimo de Alcalá written around 1540-1541. Another example is the narration of the fall of the city Tollan (or Tula) recovered in the works of Fray Bernardino de Sahagún, Fray Juan de Torquemada, and the Jesuit Francisco Javier Clavigero.
Originally, the tetzahuitl are experiences determined by an indigenous perspective, linked to the principles of space-time relations in the Mesoamerican imaginary. However, the omens referred to in Book XII seem to be the product of a transcultural vision that attempted to find elements coherent to European imaginaries in indigenous cultural narratives. One has to read the Historia general de las Cosas de la Nueva España as a comprehensive encyclopaedia of the Nahua culture, albeit it has been written under the influence of Franciscan monks and under the impression of the Conquista – quasi a post-apocalyptic product. The series Post-Apocalyptic Visions of the 12th Book proposes a contemporary approach to the worldviews, myths, and stories implied in said narratives. This allows the observer to find a multiplicity of realities in cultural practices, languages, and representations and, as such, enables the exploration of diverse cosmohistorical and cosmopolitical dimensions.


[§0] First chapter in which it is said what happened. There were seen signs and tetzáhuitl (omen) when the Spaniards had not yet come to the land here; when they were not yet known to the inhabitants here. 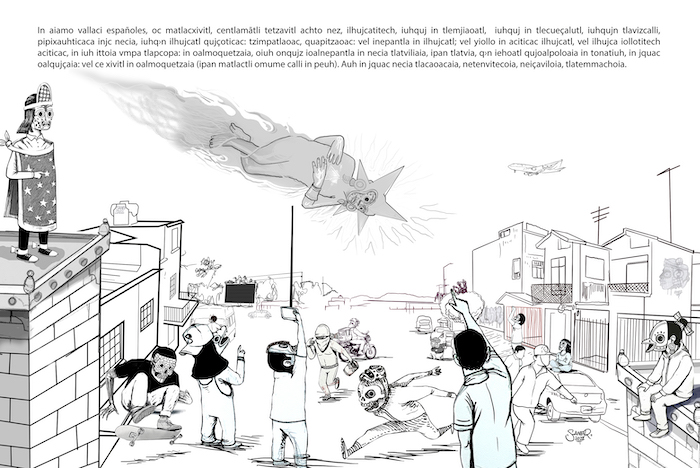 [§1] Ten years before the Spaniards came to this land, a tetzahuitl (omen) appeared for the first time in the sky, it was something both marvellous and frightful. It sparkled, like a spike of fire, like a tongue of flames, and like the dawn. It raised and seemed to pierce the sky. It was wide below and pointed above. Its centre reached well up in the middle of the sky. This is how it looked from the east; it came this way. This is how it appeared at midnight, it seemed to dawn. When dawn came, the rising sun made it disappear. For a full year, it showed itself here (it was in the Twelfth House that it began). And when it emerged, people would make noise, and smack their hands on their lips; they were shocked and expressed their fear. 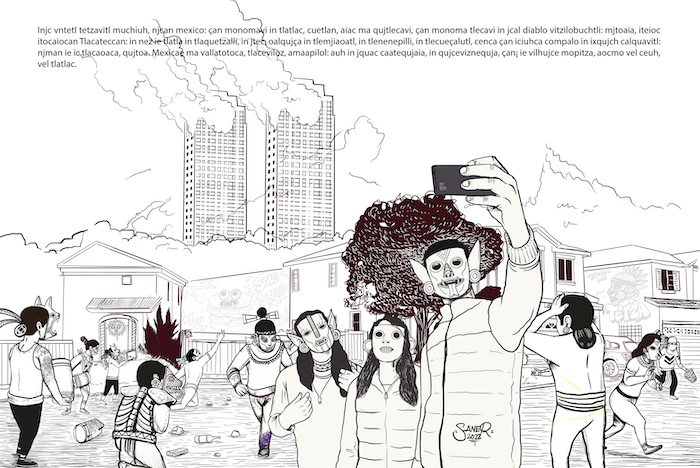 [§2] The second tetzahuitl (omen) that occurred here in Mexico was that the house of the god Huitzilopochtli (god of war), called ‘his mountain’ Tlacateccan, which miraculously went up in flames. Nobody had set off the fire. It was as follows: The tongues of flames, spikes of fire, and raging flames seemed to come from inside the wooden columns. The whole house burned very quickly and turned to ashes. The people began to shout, saying, “Mexicans, everyone come along running, it must be put out, bring your water jars!” But when they threw water on it, trying to extinguish it, the fire burnt all the more. It could not be put out and all was entirely burnt. 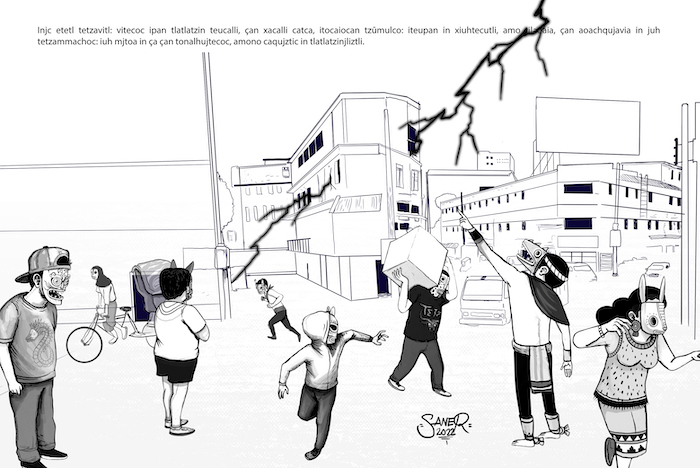 [§3] Third tetzahuitl (omen): A bolt of lightning struck the temple of Xiuhteuctli, the god of fire. The place was merely a hut and called Tzonmolco. It did not rain heavily, it only rained dew, so it was seen as an omen. Thus, it was said: "It was only a stroke of the sun” and "the thunder was not heard either". 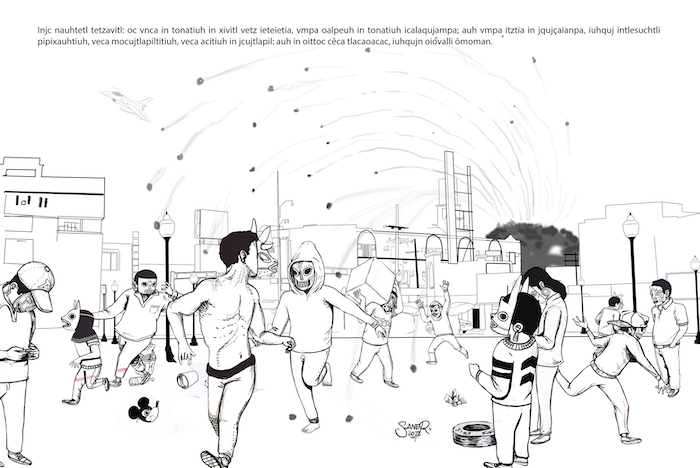 [§4] Fourth tetzahuitl (omen): When the sun was still shining a fire fell, it split into three. It began where the sun sets and headed in the direction of where it rises. Similar to embers trailing across the sky, it had a long tail reaching a large distance. And when it was seen, the people made so much noise that it was as if many bells were ringing. 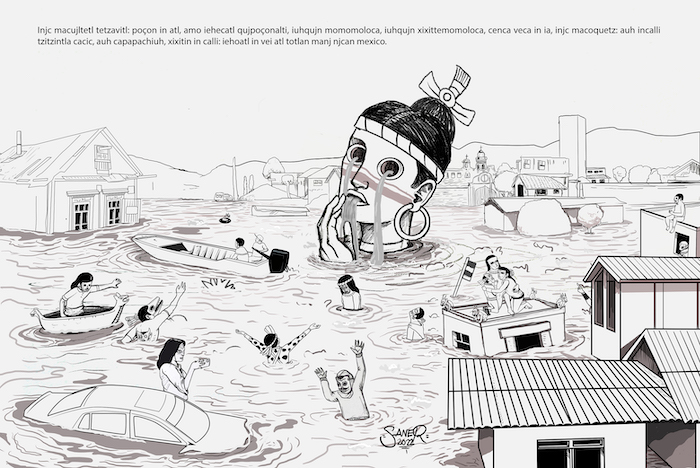 [§5] Fifth tetzahuitl (omen): The water of the lake boiled over and it was not the wind that caused it. It was almost as if it bubbled noisily. It reached far and wide; which is why it rose and reached the foundations of the houses, and, as such, they were destroyed. This was the great lake that extends around us here in Mexico.

[§6] Sixth tetzahuitl (omen): Many times, a woman was heard crying and shouting. At night she shouts a lot, and she goes around saying: "My children, this is why we are about to go away (be destroyed)”. Sometimes she says: "My children, where am I going to take you?” 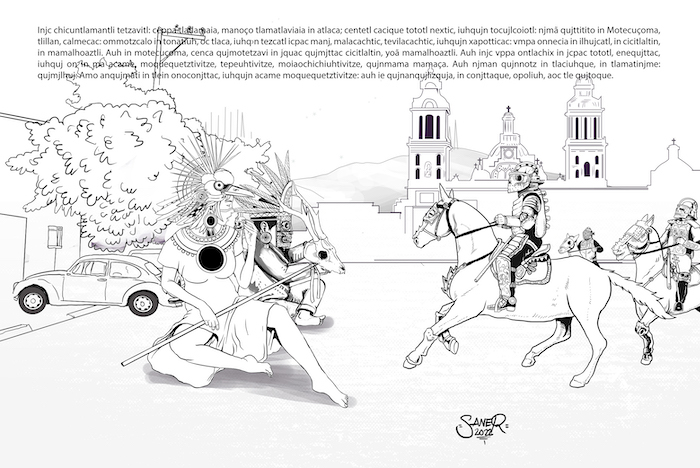 [§7] Seventh tetzahuitl (omen): Once, the people of the waters were fishing with fishing nets and hunting with nets as well, and they caught a dark bird the size of a crane. Then they went to show it to Moteucçoma (the ruler), who was in a place of blackness that they called Tlillan (a sacred space) at Calmecac (a school for children of the nobility). The sun was already setting, but it was still daylight. On top of the crane there was something like a mirror, circular like a winch and round as if it were perforated in the centre. There the sky, the stars, and a mamalhuaztli (a stellar constellation, also a setup for drilling on wood to make fire) could be seen. And Moteucçoma took it for a very bad omen when he saw the stars and mamalhuaztli. The second time he looked at the bird’s head he saw something like a multitude of people coming marching, they were coming to conquer, they were coming dressed for war, and they were being carried by deer. Then he called the fortune-tellers, the sages, and said to them: “Do you not know what I’ve seen, something like a multitude of people coming marching along”. But when they were going to answer him, what they saw disappeared, and they could say nothing more. 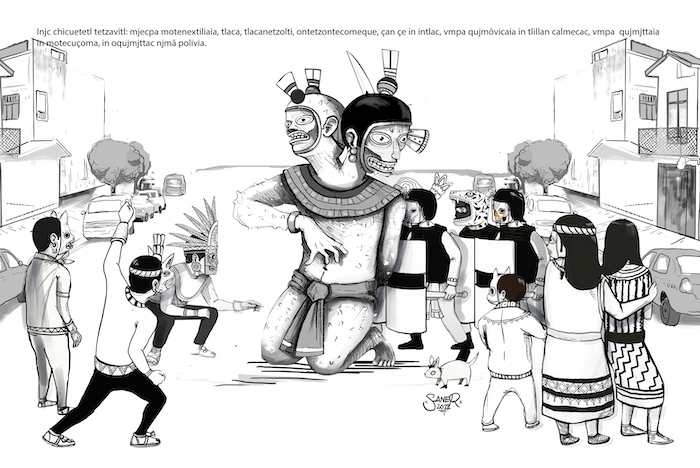 [§8] Eighth tetzahuitl (omen): Many times, men were discovered, monstrous men, with two heads and only one body; they were taken to the Tlillan (a sacred space) at Calmecac (a school for children of the nobility). Moctezuma (the ruler) would see them there; he would see them and they would immediately disappear.

The artist Saner (Edgar Flores), is an illustrator, graphic designer and street artist from Mexico. His works often show everyday situations with figures wearing indigenous symbols and clothing and address various political and social discourses. Main elements in Saner's work are masks with figures and animals such as jaguars, coyotes, gods and skulls that reflect the mysticism of Mexican traditions. They express the emotions that each figure represents and thus, paradoxically, only show their true face through the veiling.

Graffiti and street art have been creative nuclei of major metropolises for decades. They bring our cities to life. The METROPOLINK Festival in Heidelberg offers one of Germany's largest venues for street art on 4000 square metres of indoor and outdoor space. With numerous murals by internationally and nationally renowned artists, the festival is a melting pot of urban art and a place for creative experiments, workshops and light shows.

Translation and interpretation by CAPAS.