Neuromancer, Blade Runner, and The Matrix – then at the end of 2020, cyberpunk experienced a powerful revival with the release of the computer game of the same name. As a cultural discourse, cyberpunk stands for aestheticized retrofuturism, post-apocalyptic visions of society, and anthropological dissolution of boundaries. With a joint symposium, Baden State Museum, Macromedia University, CAPAS, and the Center for Art and Media (ZKM) went on a quest to explore the topic further. 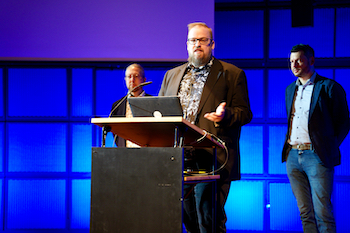 The term "cyberpunk" first appeared in 1980 in a short story by Bruce Bethke. As a cultural phenomenon, cyberpunk was fleshed out and popularized primarily by films such as Ridley Scott's 1982 Blade Runner and Katsuhiro Otomo's 1982 cult manga Akira as well as William Gibson's 1984 novel Neuromancer. At the centre  of such stories are mostly post-apocalyptic (although this characterization remains open for discussion, as the symposium has shown) dystopias characterized by mega-metropolises and corporations, in which physically and mentally optimized people struggle for self-determination and survival at the interface with cyberspace. In contrast to the typical utopias of many other classic science fiction scenarios, the cyberpunk world is not sterile, clean, and shiny but rather marked by dirtyness, violence, and pessimism; as only half-jokingly remarked upon recurringly during the symposium: it typically rains all the time, and it ought to be so.

In her opening talk Mirrorshades Cheap Truth and Punkish Violence: The Emergence of Cyberpunk, Jiré Gözen positioned cyberpunk in the science fiction and technoculture spectrum from Frankenstein to Neuromancer. While  these earlier phases can be seen as more of a revolt–more Punk so to say–before the phenomenon entered the mainstream. This aspect was further explored by Julia Grillmayr’s talk All the -punks! Dystopias and Utopias of a bustling suffix, critically reflecting on the abundance of new “-punk” genres, which might be seen as empowerment, but could also merely be a label or a pose. Lars Schmeink also elaborated on these inherent ambivalences and paradoxes in cyberpunk; with a strong anticapitalistic pose and at the same time a clear market logic ´throughout the phenomenon and in the overall “cyberpunk business”.

As the subject of artistic counterworlds, cyberpunk is still present today in various forms. After all, many of the visions of the cyberpunk cosmos have become reality in the meantime, just think of globally acting megacorps or the gradual transformation of the internet into a metaverse. This reciprocal relationship, the interdependencies between fiction and factual developments such as the Neuralink project were also raised by Gözen in a critical reminder (who wants to realize a proposed fictional dystopia?) but also with the potential to positively and productively shape socio-technical developments. 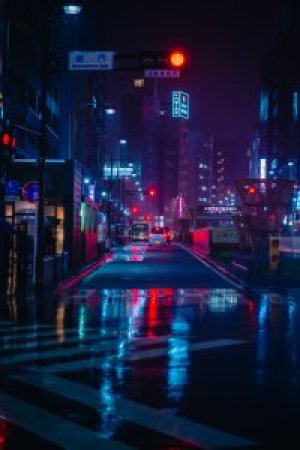 Cyberpunk has a long history of computer games with various adaptations, which were impressively, visually, and appealingly summarized by Dominik Rinnhofer. One fascinating aspect of the digital aesthetics of cyberpunk was pointed out by Jacob Birken, who made the connection between the dominant colours of cyan and magenta in typical cyberpunk imagery to the availability of the CGA colour palette of the computers at that time. Although, his presentation of the identical visual appearance of Miami Vice television series and the overall colour preferences in design in the later 80s show that at the same time, this might be a question of aesthetic zeitgeist.

With the release of the computer game Cyberpunk 2077 at the end of 2020, the phenomenon has once again experienced a renaissance of global proportions, as discussed with journalist and games expert Gunnar Lott: on the one hand, it was the most hyped game of all time, sold millions of copies and used by the largest simultaneously active community of players, allowing deep immersion and experience of the world of cyberpunk and its stories. On the other hand, since its release, the game has also been sharply criticized and has become one of the most controversial titles ever. The sprawling glitches in the early  version of the game creates an interesting cross connection to a feminist theoretical perspective on cyberpunk with the concept of Glitch Feminism, as presented by Janina Loh among others in her talk. Another fascinating coincidence is that the influential Cyborg Manifesto by Donna Haraway was published the same year as Neuromancer.

In addition to the many questions the topic itself bring up, the reception raises the question, of why the phenomenon of cyberpunk has apparently struck a nerve in 2020 in the midst of a global pandemic. One interesting thought was presented by Christian Stein from gamelab.berlin who took a closer look at the presentation of Night City, the urban setting of the current computer game as well as the original Neuromancer novel. While the game itself is driven by missions with the city only as backdrop for the plot, one could also experience the virtual and fictional environment by simply strolling around (Johannes Bernhard proposed a connection to the concept of dwelling as outlined by Michael Theunissen in his Negative Theology of Time). A misappropriation of the digital environment so to say, but one which was only made really attractive with improvements through updates after the initial release. Looking at the circumstances at the time, this becomes another interesting coincidence, since strolling around through the actual cities was prohibited due to the various COVID-19 lockdowns. 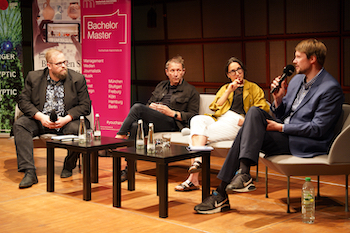 The re-emergence of cyberpunk in the current times closes a circle, since the pen-and-paper role-playing game developed in the 1980s for cyberpunk is set in 2022, and therefore the computer game also repeatedly works with flashbacks to our current year. CAPAS Fellow Adrian Hermann expanded the perspective on cyberpunk and post-apocalyptic scenarios through role-playing games. While one might think this might be an antagonism to the much-awaited next generation digital game, it can be seen as quite the opposite: one might consider tabletop-role-playing games as the more advanced games, since they create the experience directly in the thoughts of the players: a non-technical quasi (metaphorical) solution for a brain-interface in the truest cyberpunk-sense. However, in another point the apocalypse panel remained in disagreement. While some see cyberpunk in line with other (post-)apocalyptic scenarios, CAPAS director Robert Folger argued against the seeming ubiquity of apocalyptic ascriptions and placed cyberpunk in a context of dystopias and anti-utopias. Even when looking at the classics of the field, for example the aforementioned Akira, the scenario does include the devastation of a nuclear war and a field of ruins in the city (Neo Tokyo in this case), but the cultural fabric of society seems to remain overwhelmingly uninterrupted.

Overall, cyberpunk as a computer game with its playable staging of a retrofuturism and the vision of a technical-digital future with apocalyptic, anthropological and capitalist dimensions as well as the overarching genre or rather phenomenon offer various opportunities for further considerations on socio-technical scenarios and apocalyptic dimensions.